get direct link
Embed this tool:
get code

What is a correlation coefficient?

The phenomenon measured by a correlation coefficient is that of statistical correlation. We say two random variables or bivariate data are correlated if there is some form of quantifiable association between them, some kind of statistical relationship. A trivial example would be to plot the change in average daily temperature and the consumption of ice cream, or the intensity of cloud coverage and rainfall precipitation in a given region. We will observe that the two variables tend to change together, to an extent, suggesting some dependence between them. The dependence might be due to direct causality, indirect causality, or it might be entirely spurious.

A correlation coefficient calculated for two variables, X and Y, is a measure of the extent to which the dependent variable (Y) tends to change with changes in the independent variable (X). It quantifies both the strength and the direction of the relationship. A positive correlation coefficient reflects a straight relationship between the variables while a negative one reflects an inverse one (when X is higher, Y is lower, and vice versa). A coefficient of zero signifies complete lack of a statistical association (orthogonality), while a coefficient of one (or minus one) suggests a perfect correlation (X and Y change in unison).

We can therefore distinguish between three basic types of correlation:

An example of a negative correlation is shown below, with the accompanying Pearson's correlation coefficient (R). 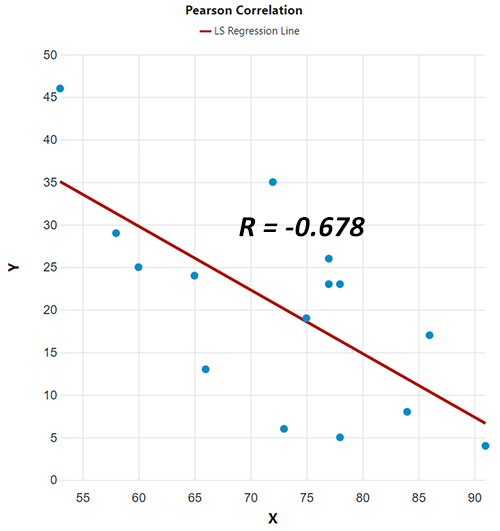 To use this correlation coefficient calculator first enter the data you want to analyze: one column per variable, X and Y. Optionally, you can enter pair weights in a third column, in which case they will be applied to the values resulting in a weighted correlation coefficient (only applies to Pearson's coefficient). Columns are separated by spaces, tabs, or commas, so copy-pasting from Excel or another spreadsheet should work just fine. All columns should have an equal number of values in them.

Then you need to select the type of coefficient to compute. Coefficients supported in the calculator are:

The appropriate coefficient will depend on the type of your data and the type of correspondence that is thought to underlie the supposed dependence. This step is crucial in drawing correct conclusions about the presence or absence of correlation, as well as its strength. If you need guidance on this, the comparison of the three coefficients of correlation that this calculator supports can be found below and should be of great assistance.

The coefficient correlation calculator will produce as output the selected coefficient and the sample size. It will also output the z score, p-value, and confidence intervals (two-sided bounds and one-sided bounds) for all but the weighted Pearson's coefficient. The output also includes the least-squares regression equation (regression line) of the form y = m · x + b where m is the slope and b is the y-intercept of the regression line.

Pearson's vs. Spearman's vs Kendall's coefficient

The choice of the correct correlation coefficient is essential in making correct inferences. Violating the assumptions behind a statistical model results in meaningless (or misleading) numbers. Choosing the wrong coefficient can also mean that you will fail to capture a true correlation, e.g. if you use Pearon's coefficient while the relationship is non-linear. As Arndt et al. put it: "The wrong choice can obscure significant findings due to low power or lead to spurious associations because of an inflated type I error rate." [5].

To help you with this choice, below is a table with essential characteristics and assumptions for the three most used coefficients, as well as guidance on when to use which.

Since it is often mistakenly believed that Pearson's r requires that both X and Y are normally distributed, it warrants repeating that this is not so. As noted by Spearman [2] "...the method of "product moments" is valid, whether or not the distribution follows the normal law of frequency, so long as the 'regression' is linear". So neither coefficient relies on distributional assumptions for its validity.

Normality is an assumption only for the calculation of related statistics and if those are of interest you can use our normality test calculator to check for departures. Keep in mind that high p-values from the normality tests might be just due to having a small sample size and tests not being sensitive enough.

As you can see, making the right choice is not a trivial matter as it requires knowing your data and understanding the potential dependence. Make sure you understand the implications of selecting one method over the other.

The correlation coefficient calculator supports several different coefficients. The equations used to compute each of them are explained here in some detail.

where cov(X,Y) is the covariance of the variables X and Y and σX (sigma X) is the population standard deviation of X, and σY of Y. Mathematically, it is defined as the quality of least squares fitting to the original data. It is applicable when we know the population mean and standard deviations, which is rarely the case in practice. Hence most of the time the applicable formula is the equation for the Pearson sample correlation coefficient r.

The formula for computing Spearman's rs (Spearman's rank correlation coefficient) is as follows [2]:

where rgX and rgY stand for the rank transformed values of X and Y. Therefore, Spearman's correlation coefficient rs is simply the Pearson correlation coefficient computed using the rank values instead of the raw values of the two variables, which is why it can uncover non-linear, as well as linear relationships between X and Y, as long as Y is a monotone function of X. In other words, the Spearman rs assesses how well an arbitrary monotonic function can describe a relationship between two variables, without imposing any assumptions on the frequency distribution of the variables [4].

The formula for computing the Kendall rank correlation coefficient τ (tau), often referred to as Kendall's τ coefficient or just Kendall's τ, is as follows [3]:

Where n is the number of pairs and sgn() is the standard sign function. The coefficient computed with the above equation is known as (τA) and only works when there are no ties in the data. The calculator uses a slightly modified equation (τB) which accounts correctly for ties within the datasets [6].

Kendall's tau quantifies the similarity of the orderings of ranked transformed data and can be interpreted as the probability that as X increases Y will increase rescaled from -1 to 1. This coefficient was not as popular in the near past mainly due to its prohibitive computational complexity, but the ease of interpretation and its other desirable qualities - high power with good robustness, coupled with an intuitive interpretation as the probability that any pair of observations will have the same ordering on both variables rescaled from -1 to 1 [5] - make it a prime candidate for many research questions.

The formula for computing the weighted Pearson correlation coefficient is as follows:

where mx and my are the weighted means of x and y computed in the usual manner.

Using the same notation, the formula for the weighted standard deviation is:

It is computed equivalently for y.

A prominent case we can examine as a practice problem is the association of smoking with various diseases and shortened lifespan. When observing population wide health trends, researchers noticed a potential link between smoking and various diseases, many cancers included, as well as all-cause mortality. What does one such correlation look like? Let's say we take a representative sample from men 50 years and older who smoke, and measure both the number of cigarettes they consume per day and the age at which they died. The number of cigarettes is our independent variable X, whereas longevity in years is our dependent variable Y.

Putting the numbers in the calculator and selecting to use Kendall's correlation coefficient we can quantify the relationship between smoking and longevity. In this case the coefficient is -0.541 meaning that there exists a moderate inverse association between X and Y. The higher the number of cigarettes, the lower the longevity - a dose-dependent relationship. The resulting p-value of 0.0022 shows that observing such a negative correlation would be highly unlikely if there were none or positive correlation instead.

If you'd like to cite this online calculator resource and information as provided on the page, you can use the following citation:
Georgiev G.Z., "Correlation Coefficient Calculator", [online] Available at: https://www.gigacalculator.com/calculators/correlation-coefficient-calculator.php URL [Accessed Date: 28 Nov, 2022].