The calculator inputs are straightforward: RAID type, drive capacity, cost, drives per RAID and number of RAID groups. The calculator supports over the 10 major types of RAID setups. Various types of data units are supported for input, and while the cost is indicated in U.S. dollars, you can enter any currency and get the same one in the ouput since the RAID calculator software does not do any currency conversions.

On top of RAID capacity, this calculator outputs metrics such as redundancy factor, price per usable TB/GB, as well as read and write speed gains. These can help you decide if the selected configuration is right for your particular case - be it for a server or a workstation.

RAID (stands for Redundant Array of Independent Disks, originally Redundant Array of Inexpensive Disks) is a data storage virtualization technology that combines multiple physical disk drive components into one or more logical units. The purposes is to provide data redundancy, performance improvement, or in certain cases: both. The term was coined in a paper by Patterson at.al. in 1987-1988 when they argued that an array of cheap magnetic disks can outperform the top performing mainframe drives of the time. This argument was proven right, the business case for RAID exists, and need for RAID calculator solutions arose.

In a RAID data is distributed among the drives (could be HDD or SSD) in one of several ways called RAID levels. The particular configuration depends on the required level of performance and redundancy. Each RAID level provides a particular balance across several variables: reliability, availability, performance, and capacity. The techniques to achieve that are: mirroring, in which identical data is copied onto more than one drive; striping, which partitions each drive's storage space into units ranging from a sector up to several mb; parity - in which information is striped across each drive, allowing the RAID to continue working even if one drive were to fail. Parity uses the XOR operation to allow information to be restored in case of a drive failure. Check the graphs below the levels table for visuals.

RAID levels greater than RAID 0 provide protection against unrecoverable sector read errors, as well as against failures of whole physical drives. A detailed list of RAID levels supported by our tool follows.

These are the various RAID configurations as used in calculating RAID capacity in our calculator above. 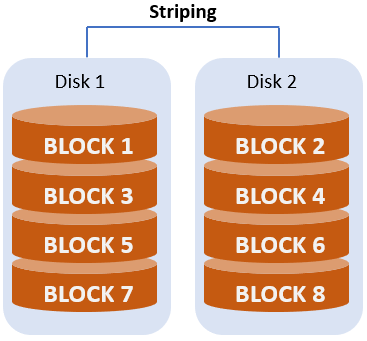 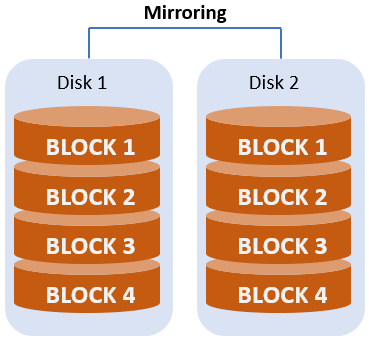 You can use the above images to better understand the intputs and outputs of the RAID calculator.

How to calculate RAID capacity?

In a RAID, mirroring and parity decrease the usable disk space as you can verify using our RAID space calculator. This is the cost to have advantages like fault tolerance and high availability. The usable disk space can be as low as 50% of the total disk space you buy, so beware about the trade-offs involved in using RAID and study each configuration carefully. This free RAID calculator will greatly assist you in this task.

In our online calculator you can select between four types of storage units: classic binary terabytes and gigabytes and SI terabytes and gigabytes. In order to differentiate between the two, the International System of Units (SI) made the horrible decision to start using existing terminology to refer to something else. Thus the terabyte (TB) became 1000 GB, instead of 1024. So, they needed a name for the 1024GB terabyte, so they chose "tibibyte" with a symbol "TiB". The story is the same with gigabyte and gibibytes (GiB).

Do I still need a backup?

Absolutely! RAID is no replacement for backup. Even though some RAID levels provide data redundancy, that doesn't mean it should be used as backup of your critical files. While a RAID protects you against drive failure, it does not protect you against errors (human or otherwise), file corruption, malicious actors or RAID controller failure.

If you'd like to cite this online calculator resource and information as provided on the page, you can use the following citation:
Georgiev G.Z., "RAID Calculator", [online] Available at: https://www.gigacalculator.com/calculators/raid-calculator.php URL [Accessed Date: 28 Nov, 2022].