Use this exponentiation calculator to easily calculate the power of a given base, raised by a given exponent. Use when faced with exponential growth, exponential increase or decrease scenarios.

Exponentiation. How to calculate exponents?

Exponents are related to logarithms so that the natural logarithm ln(e) is the inverse of the exponential function be, however defining exponentiation using logarithms is more common when dealing with complex numbers.

In combinatorics exponents express the number of possible permutations, that is - how many unique ways there are to select a part of a collection, or a set of things in which the order matters. You can use our permutation calculator for these calculations as well.

The formula for exponentiation is:

where n is the exponent and b is the base. An exponent with base 0 does not technically exist, so it is not supported by our exponent calculator.

Exponentiation has uses in economics (e.g. compound interest), biology (population growth is often exponential), chemistry, physics, and, of course - computer science where storage capacity units are traditionally based off the powers of two, while public-key cryptographic functions rely on the hard reversibility of exponentiation. Practitioners of these disciplines often end up using an exponential calculator.

In physics we have exponential decay related to light, sound, gravity, dangerous chemicals, and radiation (see radioactive decay & half-life). In marketing and the spreading of ideas, memes, viral videos, etc. we talk about exponentially increasing reach. Moore's law about the increase of computing power is in essence an exponential law. The scale for measuring Earthquakes is also exponential, so a magnitude 5 earthquake is 32 times stronger than a magnitude 4 earthquake (101.5), while a magnitude 6 earthquake releases 1,000 times more energy (103) than a 4. The decibel scale used to measure volume is also exponential: 20 dB = 102 dB = 100 power ratio, 30 dB = 103 = 1,000 power ratio, so a 30 dB sound level is 10 times louder than a 20 dB sound level. 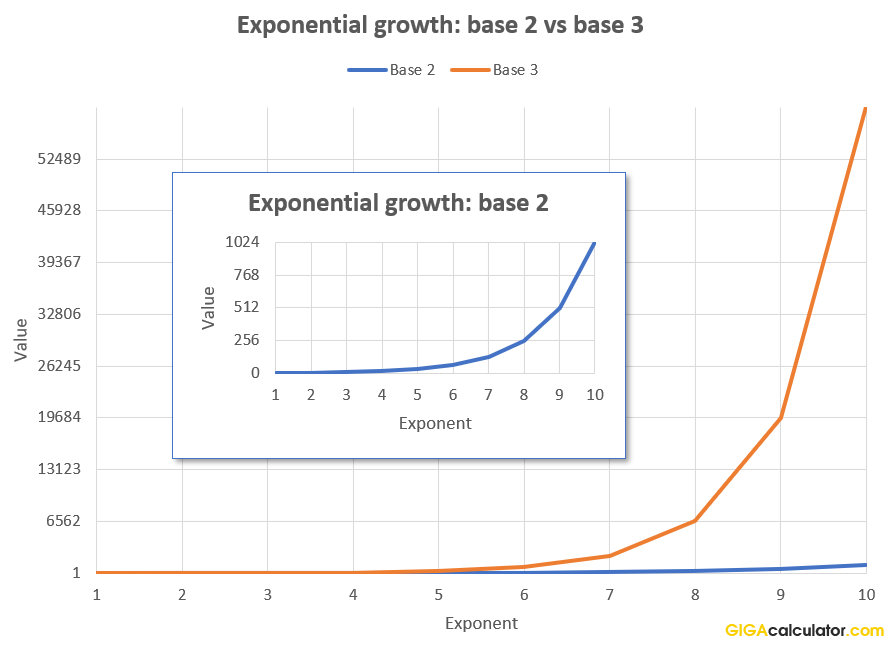 In the graph above, you can think of each exponent as a generation (in biology), or as a tier of people who have seen a viral video or read a viral article (in marketing), or the power released from an earthquake of a magnitude equal to the exponent. As you can see by step 10 an exponential process that started with a base of 2 is completely dwarfed by one started with a base of 3 to such an extent that the base 2 line looks almost like a flat line next to the base 3 exponential curve, which is why we had to provide a zoom-in. The graph was compiled using our online tool.

In complex systems exponential processes often precede cataclysmic events, such as ruptures and explosions. The distribution of work contribution, ability / talent, and wealth in humans and other species is exponential according to work [1][2] often cited by the famous psychometrician Jordan B. Peterson. In the human studies circles it is known as the Paretian distribution (Pareto distribution).

Financial crises, economic crises and bubbles have exponential nature before they pop according to Didier Sornette & colleagues [3]. The size of cities is well predicted using power law (Zipf's Law) [4] which follows an exponential function.

[3] D.Sornette (2009) "Dragon-Kings, Black Swans and the Prediction of Crises" International Journal of Terraspace Science and Engineering 2(1):1-18

If you'd like to cite this online calculator resource and information as provided on the page, you can use the following citation:
Georgiev G.Z., "Exponent Calculator", [online] Available at: https://www.gigacalculator.com/calculators/exponent-calculator.php URL [Accessed Date: 27 Jan, 2023].