Use this log calculator to easily calculate the logarithm of a number with a given base: logb(x). The default base is the natural logarithm e.

What is a logarithm?

The logarithm (log) operation in mathematics is the inverse to exponentiation, meaning that the log of a number is the exponent to which another fixed number called a "base" was raised to produce the number. For example log232 = 5, since 25 = 32. This is an example of a simple logarithm as it basically counts the number of multiplications of the same factor - in this case 2. The notation is logbx or logb(x) where b is the base and x is the number for which the logarithm is to be found. 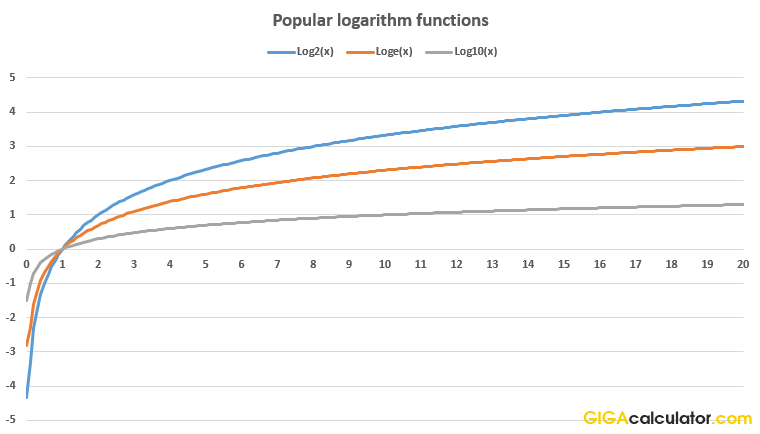 The graph above presents the values for the common, natural and binary logarithm functions for the values from 0.1 to 20 (logarithm of zero is not defined).

How to calculate logarithms?

Certain logarithms can be easy to compute in your mind, e.g. log10(1000) = 3 since 10^3 = 1000. A general solution is to calculate logs using power series or the arithmetic-geometric mean. A pre-calculated table can also be of use if only a range of bases and logarithms are of interest on a daily basis. For anything else it is most convenient to use an online log calculator like this one due to its ease of use.

Logarithmic scales are often used when representing wide-ranging measurements in a visually compelling graph. A prominent example is the decibel scale in which the unit (dB) expresses log-ratios of signal power and amplitude - mostly used for sound waves. pH is a well-known chemistry scale for measuring acidity. Discrete logarithms have uses in public-key cryptography, such as the one used to deliver this log calculator securely to you, making sure no one can eavesdrop on your communication with our website.

Logarithms are used in probability theory, e.g. the law of large numbers according to which the ratio of heads to toes during tosses of a fair coin approaches 1/2 as the number of tosses approaches infinity. Some variables have log-normal distributions. The maximum likelihood estimate occurs at the same parameter-value as a maximum of the log likelihood, and the latter is easier to maximize, especially when there are multiplied likelihoods for independent random variables [1].

Log calculations occur in fractals, entropy and chaos theory, as well as the analysis of computation complexity of different computer algorithms [2]. They are valuable for describing algorithms in which a larger problem is divided into a set of smaller ones, and then the solutions of the smaller problems are joined to arrive at the solution of the larger problem.

If you'd like to cite this online calculator resource and information as provided on the page, you can use the following citation:
Georgiev G.Z., "Logarithm Calculator", [online] Available at: https://www.gigacalculator.com/calculators/log-calculator.php URL [Accessed Date: 28 Nov, 2022].