Use this calculator to determine the coordinates of the midpoint (M) of a line segment determined by its two end points (A, B). Find what the midpoint of a segment AB is.

What is a midpoint?

In geometry, a midpoint is the point on a segment of a straight line which splits it in two equal halves which is why it is sometimes referred to as a halfway point. A segment is defined uniquely by two points (say A and B) and has a unique point (say M) which sits in its middle. A more technical way of describing a midpoint M is to say that it bisects the segment AB.

In a two-dimensional Cartesian coordinate plane each point has two coordinates - one on each axis. A simple visualization of the midpoint of a straight line AB and the corresponding coordinates is shown below: 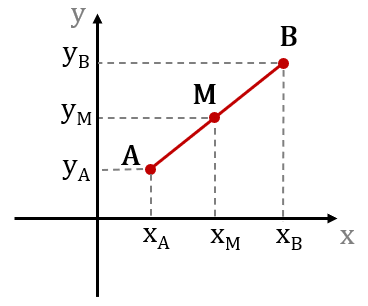 The equation for finding the coordinates of the midpoint of a straight line AB defined by the points A and B is:

An example for using the midpoint equation can most easily be given in geometry. If one is given (or measured with a ruler) the coordinates of the two endpoints, one can determine the middle point. An example task would be:

In physics, midpoint calculations have several prominent applications. For example, the center of mass of a given object is its center of gravity. In order to balance that object, support has to be provided to the midpoint to counteract gravity in such a way that neither end begins to dip. Finding the endpoint has obvious utility.

In tasks related to transportation or movement of objects in a straight line through two-dimensional space, the midpoint formula calculation can be useful in determining at what point or when a vehicle is halfway through to its destination. Obviously, objects rarely have the option of moving in a straight line for long distances, so such applications are mainly for teaching purposes.

If you'd like to cite this online calculator resource and information as provided on the page, you can use the following citation:
Georgiev G.Z., "Midpoint Calculator", [online] Available at: https://www.gigacalculator.com/calculators/midpoint-calculator.php URL [Accessed Date: 06 Dec, 2022].