This versatile impact force calculator is useful for estimating the impact forces involved in collisions of different kinds. For example, it can be used to calculate the impact force of a vehicle (car, truck, train), plane, football, of birds hitting a plane or wind mill, as well as for falling bodies that crash into the ground. It can also be used to calculate the force of impact of different kinds of projectiles. You need to know the body's mass, velocity on impact (can be calculated if you know its acceleration and the duration of its travel time) and either collision duration (from first contact to the end of the collision process) or collision distance, e.g. the depth of the bent on a car bumper following a crash.

The impact force calculator can also be used to solve for any of the other values: mass, velocity, impact duration and deformation distance. The respective input fields will be hidden or displayed upon selecting what you want to use the calculator for.

The output if calculating collision force is in Newtons or KN, MN and GN, as well as pound-force (lbf). For other outputs it is in both standard metric units and imperial ones, with the units automatically being adjusted depending on how big or small the resulting value is.

The formula for impact force expressed in terms of the body's velocity (speed) on impact (v), its mass (m), and the collision distance (d) is the first formula below: 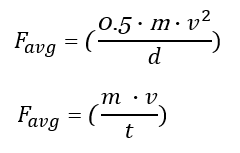 whereas the second equation is applicable if instead of the collision distance we know the duration of the collision (t) which is Δt = t1 - t0 where t0 is the first moment in which the bodies connect and t1 is the moment they reach the end of the deformation process by either denting or bouncing off each other. This formula will output the result in Newtons, assuming your input was in the correct standardized metric units: kilograms, meters, seconds, meters per second. Straightforward transformations of these impact force formulas lead to calculations for the body mass, velocity on impact, collision distance or collision duration, all supported by our force calculator.

If one thinks about force on impact in terms of development of safety measures and equipment, then it is immediately obvious that since the body mass is usually constant, the variables one can alter are the speed (hence speed limit laws on most roads) and the collision distance or collision duration, which are usually two sides of the same coin. Car manufacturers, for example, make cars less sturdy than they can be so they can crumble when excessive force is applied to them, thus increasing the deformation distance and hence the impact duration, which results in lower impact force during a car crash.

The impact formula has decent accuracy, but just as any physical model is just an approximation. Certain assumptions regarding spring force and wave propagation, as well as the hardness of the materials involved will hold differently in different situations. Results from this impact force calculator should mostly be used as a teaching device and a rough guideline, however some demonstrate [3] that the equations can be used to determine the appropriate force sensor measuring range during impact testing, stating that the "perfect rebound assumption" which is part of the formula performs well at least in the case discussed in the white paper.

Example 1: Car crash force. A car weighs 2400kg (2.4 tonnes) and is moving with a constant speed of 27 km/h when it hits a light pole head on. The deformation distance is measured at 75cm. What is the impact force of the car?

Example 2: Using the situation in example 1, but now instead of knowing the depth of the dent, we were lucky enough for the impact to be caught on a high-speed camera and we can measure that it took 0.2 seconds from start to end. The average impact force is then simply 2400 · 7.5 / 0.2 = 90 kN. Thus, we can see it was the same incident described in different measures. Just out of curiosity we can increase the car's velocity to 54 km/h (15 m/s) while keeping everything else the same and we now get twice the force: 180 kN and a peak at 320 kN. For this to happen our car would need to deform a whopping 150 cm (1.5 meters) in 0.2 s.

Example 3: Calculating the impact force of a falling object, without taking into account air friction. Let's say there is a 250 kg piano hanging 5 stories high or about 15.5 meters and we drop it on hard concrete. What is the impact force, if we measure that the collision pulse is about 0.2 seconds?

Ton vs tonne, tons vs tonnes

When calculating the body mass, we output both tonne (metric ton) and ton (short ton). The first one is used by all countries in the world and is defined to be equal to 1000 kg by the international body of standardization. The ton is currently only used in the United States and is equal to 2000 pounds (2000 lbs).

If you'd like to cite this online calculator resource and information as provided on the page, you can use the following citation:
Georgiev G.Z., "Impact Force Calculator", [online] Available at: https://www.gigacalculator.com/calculators/impact-force-calculator.php URL [Accessed Date: 28 Nov, 2022].