Use this converter to easily convert your storage or bandwidth data units between each other. Bytes, KB, MB, GB, TB, kbps, mbps, gbps, KB/s, MB/s, GB/s, bits, Mbits, etc. are all supported, as well as KiB, MiB, TiB.

This tool supports pure data conversions such as from MB to GB, GB to MB, GB to TB, TB to GB, MB to KB, etc., as well as bandwidth conversions: mbps to kbps, mbps to gbps... Mixed and unorthodox conversions are supported as well, such as MB/s to mbps and mbps to megabytes per second.

A lot of people use this data unit converter to calculate storage capacity or memory capacity. Storage of digital data on any kind of device: the now forgotten floppy disks, almost forgotten CD-ROMs, DVDs, as well as hard disk drives (HDD), solid state drives (SSD), thumb drives (USB sticks) is measured in a fundamental unit: the bit. A bit is the smallest amount of information you can write to a storage device, it is either 1 or 0 on all binary systems, which is most of the systems we have to date. From it, all other data units are derived, according to two competing systems, the commonly used binary system and the standard, but not so commonly used system of the SI (International System of Units) - more on this in point 3 below.

All data storage units are derived from the bit, with the fundamental unit for data storage being the 8-bit Byte (1 Byte = 8 bits). The term was coined by Werner Buchholz in June 1956, during the early design phase for the IBM Stretch early computer [3]. Initially there were other systems with 10-bit Bytes, but these are not really in use today. In the standard binary system, you have KiloByte, MegaByte, GigaByte, TeraByte, PetaByte and so on, all being derived as the smaller unit multiplied by 1024. So:

But why multiples of 1024, you might ask? It's because in a binary system every unit, no matter how big, is a power of 2, and 1024 is 210, unlike a decimal system where it is a power of 10. It comes from how computer memory is built and addressed (yes, we are talking electrical circuit level stuff) and on that level it only makes sense that memory is built in such a way that its size (number of addressable units) scales with powers of two. If you have 10 address pins on a memory chip you get a total of 210 addresses on that chip. That's exactly 1,024, not 1,025 and certainly not 1,000 and since 1,024 was close to 1,000, computer scientists decided to adopt the kilo-, mega-, etc. prefixes which were already in use for measuring lengths and weights, despite the inaccuracy. This is how every student of computer science picks up the units alongside binary math and all the rest of basic CS.

However, this wasn't to the liking of people in the standardization institutions. The SI declared that a KiloByte is 1000 Bytes and codified that into the International System of Quantities, which, naturally, caused a great confusion since there was already a unit called KiloByte and it equaled 1024 Bytes! You can easily find a ton of topics and discissions online with people asking how many bytes or kilobytes are there in a megabyte, or how many megabytes in a gigabyte, how many gigabytes in a terabyte, and so on and so forth. In many cases people get it wrong, as they fail to recognize the existence of two competing definitions for these metrics.

In an attempt to resolve the confusion in 1998 the IEC (International Electrotechnical Commission) proposed new names for the 1024 KiloByte and the 10242 MegaByte: KibiByte and MebiByte (KiB, MiB), and accordingly for higher order metrics. Despite acceptance of these conventions by the IEEE, EU, ISO and NIST, there is still great confusion when talking about the metrics, both in common folk and among computer science professionals such as developers, etc. As with any centrally planned attempt to override what a free market system has arrived it, the SI convention is still fighting to get widespread traction, despite its adoption by the aforementioned organization.

The ill-thought of SI idea of what a Kilo-, Mega-, Giga-, Tera-, and Peta- should be follows:

Be especially careful about these discrepancies when you go out shopping for hard drives (or SSDs) since disk manufacturers use the SI system, since this allows them to mislead people that they are selling you more storage than they are. A lot more! A modern 4TB (SI) drive, for example, can only contain 3.638 TB (binary) of data. And since Windows and many other systems correctly display file sizes in binary metrics, you might calculate you need 4 TB to store all your music and videos based on what the file system is reporting, but then be unpleasantly surprised when you end up with a 10% smaller drive. 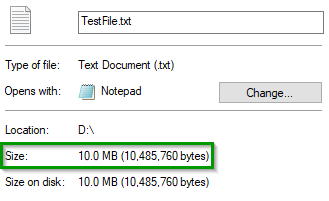 As you can see, what you get is not always what is advertised. There was a class-action lawsuit against manufacturer Western Digital filed in 2001 and settled in 2006 with WD agreeing to compensate customers in certain ways. Ever since, most manufacturers write both SI and binary units, with SI usually leading the labeling. "The suit claimed that Western Digital overstated its hard disk drives' storage capacities by approximately 7%. For example, it alleged that Western Digital 80GB hard disk drives had an actual capacity of only 74.4GB." [4] On hard disks nowadays you will see the metrics KiB (KibiByte), MiB (MebiByte), GiB (GibiByte), and TiB (TibiByte) but you will rarely hear anyone trying to twist their tongue to say them, thus the confusion with storage capacity unit continues to this day. Make sure you check the SI checkbox in our data units converter if you are working with their standard, and uncheck it otherwise.

Bandwidth data units are another thing you can use this data unit converter for, and they are also based on the bit. However, due to the different nature of the data transmission medium, compared to data storage devices, the standard naming convention follows the decimal system, not the binary one, like the standard storage device units. However, in storage the actual basic unit is the Byte, which is equal to 8 bits, while in transmission there is no secondary base unit.

When we want to express bandwidth, we use the metrics above and combine them with the per second suffix, producing new metrics that properly describe the bandwidth of a network or network-connected device such as a router, switch, LAN card, etc., e.g. a Gigabit LAN card can process 1 Gbits per second, or 1 Gbps.

The above is convenient for network engineer and developers, but for most people it is more important how many KiloBytes (KB) or MegaBytes (MB) they can transfer over a given a network in a given timeframe. Thus comes the need to convert from standard bandwidth units such as Mpbs, to a unit like MB/s (MBps), in which most file sizes are expressed. With our data unit converter, you can easily calculate how many MB/s does your Mbps or (rarely) Kbps connection can transfer. Tbps is rarely used since this speed is usually only available to network engineers and in certain scientific laboratories. Here is table you can use for quick reference:

Converting between data units is fairly trivial mathematically, especially if you have a calculator at hand. Multiplying and dividing by 1,024 if you are using the binary standard and by 1,000 if you are using the SI decimal standard. For conversions between -bit metrics and -Byte metrics you should remember to multiply or divide by 8, depending on the direction of the conversion. Below are several examples to help you get started but using our data units converter is by far the most convenient method.

If you'd like to cite this online converter resource and information as provided on the page, you can use the following citation:
Georgiev G.Z., "Data Units Converter", [online] Available at: https://www.gigacalculator.com/converters/data-storage-bandwidth-converter.php URL [Accessed Date: 27 Jan, 2023].