Use this random state generator to randomly select a state from the United States of America or another federalized country. Pick a state at random from the USA or from a different country of your choosing. Supported countries include Australia, Canada, Germany, Brazil, India, Argentina and others. Can be used in geography quizzes and games.

To pick a state at random, start by specifying which country to use. By default, the picker will use all 50 US states, excluding territories and special districts such as the Federal District of Columbia. You can check the "include territories" checkbox and the generator will also randomize all inhabited territories part of the specified country.

Our random state picker uses a random number generator to make sure each state from our database has an equal chance to be picked. It is equal to rolling a fair dice with several dozen sides or spinning a wheel where each state is represented by an equally-sized sector.

States in the following federal countries, typically federal republics, are currently supported, with the number of states in brackets:

Press the "pick a random state" button and our tool will return one state at random. If territories were also included, it could be a state or territory, with equal chance.

How many states are included?

The generator uses a database of 236 states in 10 countries, as well as a total of 15 territories. The list was last actualized in early 2022. The random state picker has an equal probability of selecting any of them, like a state wheel.

The state randomizer uses only well-recognized and established federal states. We do not make any political claims by defining a state. Our goal is simply to provide an exhaustive list that any reasonable person would agree with. Disputed states or territories are typically not included.

Below is a list of all 50 states that are used in our software, and their capital cities.

If you select to include territories in the random draw, then it would also include the District of Columbia (DC), American Samoa (AS), Guam (GU), Northern Mariana Islands (NP), Puerto Rico (PR), and U.S. Virgin Islands (VI).

Applications of a random state picker

While there are many reasons you may want to randomly select a given US state, or a state in another country, here are two of them to get you started.

Many geography-related games incorporate a requirement for randomly picking a state. It can be to start the game, or on each player's turn. Using our generator can make sure a game is fair to all players. Examples of such games are ones where players take turns saying a fact about a state. For example, a player draws a state at random and has to name its capital, population, the year it joined the union / federation, area in square miles or square kilometers, and so on.

A map of all US states can be seen below, without their names on, which can be useful if playing a game in which one needs to point to the chosen state on a map. 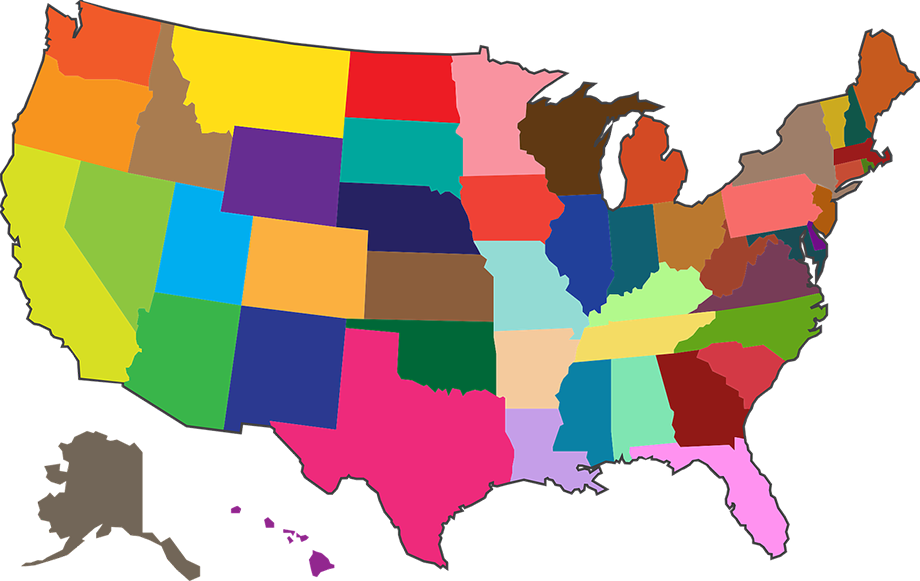 Picking a random state to visit

If you are feeling adventurous about a vacation or trip, then using a state picker to pick a destination may be a fun way to decide where to visit next. Given that you have already specified a country, one can often easily go to any part of it as tourists by traveling in luxury or on the cheap, depending on one's means and wants.

If you'd like to cite this online randomizer resource and information as provided on the page, you can use the following citation:
Georgiev G.Z., "Random State Generator", [online] Available at: https://www.gigacalculator.com/randomizers/random-state-generator.php URL [Accessed Date: 06 Jul, 2022].