Use this calculator to easily calculate how old your dog is in human years. The dog age calculator takes as input the number of years your dog has lived (dog age, dog years) and converts the dog age to a human years equivalent based on a scientific formula.

This dog age calculator makes it easy to answer the question how old is my dog in human years? If you know your dog's age, just enter it as either a number of years or months. If you don't know the age, but know the dog's birth date, enter it instead and our tool will calculate the dog age in calendar years for you. Finally click "Calculate Human Years".

The output of the calculator is the number of human years, and the equivalent human age in years and months. The tool converts dog years in human years using the formula below.

How do dog years work?

The idea of 'dog years' and 'human years' is to more easily assess what stage of life your dog is: puppy, junior, adult, mature, senior, or geriatric. While different animal associations and veterinary associations might have charts and guidelines for that, for regular people it is much easier to understand when the dog's age is converted to the age of a human in an equivalent phase of physical development. For example, 9 years in dog years are equal to 66 human years, meaning that a 9-year old dog is roughly equivalent to a 66-year old person. Some use the term 'dog years' to mean 'human age equivalent years' while the scientific literature prefers the term 'human years' as more accurate.

The application of this idea is mainly in veterinary work, but it can also help dog owners appreciate the stage of life their pet is in, the physical difficulties that may entail, and so on. Both human and animal life spans have increased over time due to superior care and the availability of more economic resources which can be dedicated to animal healthcare. Continued improvements are unlikely with the current state of medical science, but should they become a reality, we would need to change the way we convert dog years to human years.

The dog age to human age conversion formula we use in this dog years calculator is based on research by Wang et al. (2020) [1]. Its derivation comes from the comparison of human DNA methylation changes with those of dogs. Methylation is experienced by mammalian genomes as they age and can serve as a sort of epigenetic clock. It is linked with life spans of various species and hence can serve as a model of aging.

In the equation above, HumanAge is the age equivalent of a human in years whereas DogAge is the age of the dog measured in calendar years. ln is the natural logarithm function. For example, a 12 year old dog will be nearly 71 in human years.

The dog years chart below presents the equivalent human age for a given dog age. Since it was calculated using this dog years to human years calculator, it is subject to the same limitations as the tool itself. 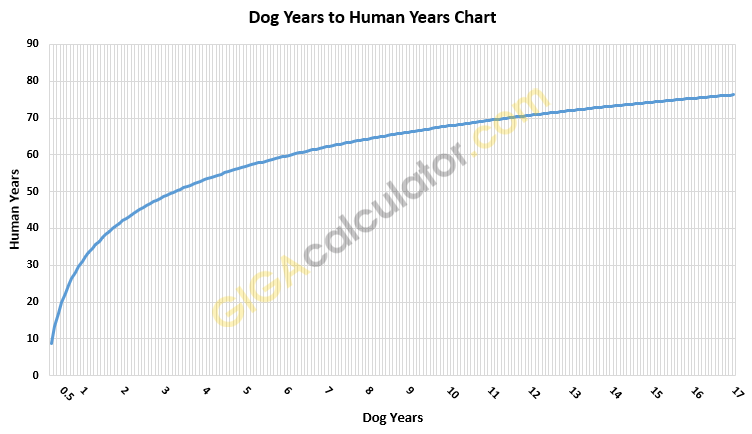 The chart can be used to tell how old is 4 in dog years, or the reverse, e.g. what is 9 years in dog years.

Limitations of the dog age calculator

Since the research used to construct this tool was carried on 104 Labrador retrievers spanning a 16-year age range, it may have lower validity for other dog breeds. It should be used with caution for breeds that exhibit a typical lifespan much different than that of Labrador retrievers. E.g. it might work well for a Boxer, a Pitbull or a German Shepherd, but it will probably slightly overestimate the human equivalent age of a Yorkie, a Labradoodle, a Maltipoo, a Cockapoo, a Shetland sheepdog, or a Jack Russell.

Additionally, the dog years equation does not support dog age less than approximately 1.8 months. For this reason a dog age below 1.8 months is calculated as 0.3 human years, which should serve as a rough approximation.

For many years the standard advice was that in order to get the human years equivalent, one needs to simply multiply the dog age by seven. So a two year old dog would have a human age equivalent to a 14-yeard old adolescent. However, this advice was never scientifically backed. For example, most dogs would reach sexual maturity between six and twelve months old, well before the two-year mark suggested by this simple approach.

Some believe that this basic advice was given to dog owners so they would remember they need to bring in their companions for a regular check up at the veterinarian office at least one a year. If one dog year is equal to seven human years, that actually sounds like conservative advice.

How many dog years are in a human year?

Understanding the non-linear monotonic relationship between dog years and human years means asking questions like how many dog years are in a human year is meaningless. There is no single number which answers that question. To answer it, one needs to present the functional relationship across the entire life spans of both dogs and humans, just like in the dog age chart.

If you'd like to cite this online calculator resource and information as provided on the page, you can use the following citation:
Georgiev G.Z., "Dog Years Calculator", [online] Available at: https://www.gigacalculator.com/calculators/dog-years-calculator.php URL [Accessed Date: 27 Jan, 2023].