Use this calculator to easily calculate the percentage of the population that have a score equal to or higher than a given IQ test score. Easily convert an IQ score to percentile and rarity (e.g. 1 in 10).

IQ stands for "Intelligence Quotient" and is a measure of human intelligence obtained through standardized tests. It is expressed on an IQ scale which is defined such that most people have an IQ between 80 and 120 (see the IQ scale section for details and on interpreting your IQ score). It is not a very intuitive scale which is why many people want to see their IQ percentile or rarity, which is what our IQ percentile calculator above is ideal for.

Attempts to measure intelligence date back to at least the 19-th century, but it wasn't until the mid 20 century that well-developed tests were invented. Initial applications included screening impoverished populations to select gifted students among them, as well as screening recruits for the U.S. Army. These tests come in many forms: some are mostly visual, others include language and basic math skills, 3-dimensional spatial tasks, and logic questions, but what is common to all of them is that they attempt to measure the g-factor, or the common factor in a person's performance on all tasks: intelligence.

The g-factor was first observed by British psychologist Charles Spearman who noticed a high correlation in school grades across seemingly unrelated subjects and reasoned that these correlations reflect the influence of a general mental ability that was expressed in all kinds of mental tasks. This has been confirmed to be the case through the impossibility of coming up with mental tasks that are not g-loaded, that is the performance on these tasks is uncorrelated with general intelligence.

IQ test scores are valuable due to their high or moderate correlation to morbidity, mortality, school performance, job performance, income, involvement in crime, and others [3,4,5,6]. They are among the most well-tested and well-researched concepts in psychology and psychometrics. As with any other statistical estimate, IQ scores can be problematic when used on the individual level, e.g. while generally you would expect a person with a high IQ to perform well in an engineering job, they might in fact perform worse than somebody with a low IQ, even if they had the same training and experience. That said, if you are trying to gauge a person's fitness for a mental task, an IQ percentile obtained from a reliable test is the single most informative piece of such information.

The IQ scale - how to interpret an IQ score

IQ tests are designed and updated on a regular basis such that they correspond to the populations they measure in a precise way: a score of 100 is the average score of the population and the distribution of IQ scores and percentiles has a normal shape with a standard deviation of 15. Therefore, the IQ score is convenient to interpret and work with if you are a statistician, but if you are not into statistics the number itself will likely mean little to you. This is where our IQ percentile calculator can assist you in computing both the percentile of the population you are in and, correspondingly, the rarity of your score.

For example, with an IQ of 125 you will be in the top 5% and hence in the 95th percentile of the population. This means that only 1 in 20 people selected at random from a large population will have a score equal to or higher than yours. The IQ scale below shows what percentage of the population falls within different ranges of IQ scores, for example 13.6% of people have an IQ score between 115 and 130, by definition. 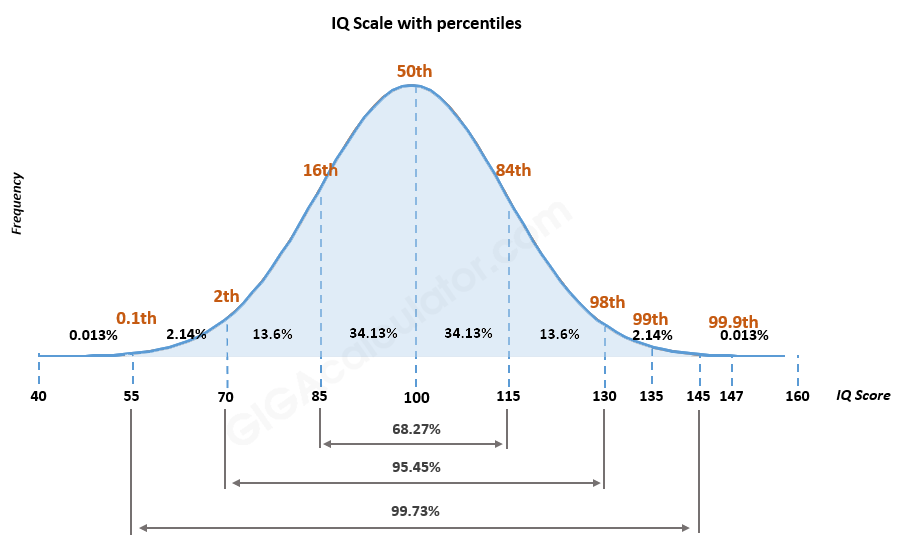 Below are some common IQ test score cut-offs and the corresponding percentiles and rarities.

Say your IQ score is 120. You can check the corresponding table row and see that this is in the 90th percentile and is correspondingly in the top 10% of the reference population. Checking the rarity column you can see that such a score would be observed in approximately 1 out of every 10 people picked at random.

There are different ways of classifying IQ scores, e.g. the Stanford-Binet classification is [1]:

Others prefer more neutral and less-informative terms like "lower extreme" and "upper extreme" or "extremely low" and "extremely high". It should be kept in mind that these are all relative to the general populace. A person with an IQ of 115 will likely be in the lowermost brackets when compared to a room full of nuclear physicists (average IQ likely 130+), even though they are above average relative to the general population.

There are many IQ tests that one can take today, the most famous ones being [2]:

Most tests are standardized so that their mean score is 100 and their standard deviation is 15 making the calculation of a percentile trivial through the use of the normal distribution CDF. Some tests use a different standard deviation: 16, 24, etc. which is why our IQ calculator allows you to specify the standard deviation of the test that produced the intelligence quotient score.

How reliable are IQ measurements?

IQ scores obtained through rigorous tests delivered by a trained psychologist or psychometrician are usually the most reliable and will provide with information about on how your cognitive abilities compare to the general population other than the IQ score (e.g. spatial reasoning, verbal skills, auditory processing, short and long-term memory, etc. Standardized tests taken as part of a high-IQ society exam (e.g. Mensa) are also quite reliable. Finally, there are different kinds of free and paid online tests with varying degrees of reliability. In all cases you have to assume some measurement error, usually a 3-point measurement error is considered, so if your obtained score is 115 it is very likely that your true score is between 112 and 118. Taking several different tests at different times and taking their average is usually the best way to get a more reliable estimate of your general intelligence.

Younger people (below 18) need to be aware that an IQ score obtained from a standard IQ test is likely to be lower than actual, although not by much, especially if taking the test after 10 years of age. The reason why scores might be lower is that the brain is not yet fully developed (for males until they are 25!) and that environmental factors have not yet had time to express themselves fully.

Can I raise my IQ?

If the intelligence quotient score obtained from a test is concerned, then there are ways to study the test questions and memorize the answers if you know what test will be administered to you. However, this will only reflect your ability to take the test and not your general mental abilities. In this sense it is possible to raise your IQ, but why would you do that? You can cheat an IQ test or an IQ calculator, but not yourself or people you interact with.

If raising actual intelligence is concerned, then we do not really know how to do that. There is research that tells us that malnourishment, maltreatment, neglect, etc. during childhood and adolescence can result in lower intelligence, however there is no known way to improve the general intelligence of a person, despite attempts to identify mental tasks, dietary regimes, lifestyle changes etc. that can result in improvement in mental abilities and therefore the IQ percentile one falls within.

If you'd like to cite this online calculator resource and information as provided on the page, you can use the following citation:
Georgiev G.Z., "IQ Percentile Calculator", [online] Available at: https://www.gigacalculator.com/calculators/iq-percentile-calculator.php URL [Accessed Date: 05 Jul, 2022].