How to calculate a sum?

Summation is the sequential addition on a set of numbers. Addition is one of the four basic arithmetic operations, the others being subtraction, multiplication and division. It is simple to do for a few numbers, especially integers, but can get more complex with fractions and real numbers, which is where our summation calculator can help. You can simply copy/paste the numbers, or enter them manually, separated by any non-numerical symbol - minus and dot excluded. Shortcuts exist for calculating sums of specific sequences.

Since addition is associative, the sum does not depend on how the additions are grouped, therefore, parentheses are usually omitted in summation. Addition is commutative, so permuting (changing the order of) the terms of a finite sequence does not change the result from its summation: summing 1 + 2 + 3 + 4 is the same as 1 + 4 + 3 + 2, as can be confirmed using our sum calculator. Summation can be performed on negative numbers as well, and when one wants to explicitly denote that the sign is taken during the operation, it is called an "algebraic sum".

If you are adding all numbers from a set together, you can refer to the result as "sum total", unlike if you add together only a part of the sequence. A sum of series, a.k.a. summation of sequences is adding up all values in an ordered series, usually expressed in sigma (Σ) notation. A series can be finite or infinite depending on the limit values.

In "Simple sum" mode our summation calculator will easily calculate the sum of any numbers you input. You can enter a large count of real numbers, positive and negative alike, by separating them using commas, spaces, news lines, tabs, or a combination of the above. Just make sure to use dot (.) as a decimal notation, e.g. 1.5 instead of 1,5 since the latter will be interpreted as two separate numbers, one and five, by our sum calculator.

In "Sigma notation" mode you are to enter the lower and upper limits, a mathematical expression through which each member of the sum series is to be computed, and finally specify what is the name of the variable used in the sigma expression. You can use "pi" and "e" for the number π and the natural logarithm e (a.k.a. the Euler number, ~2.718). It supports all arithmetic operations: + (addition), - (subtraction), * (multiplication), / (division), ^ (raise to power). Parenthesis are used to define groups within the expression.

In the expression you can enter minus as a negation (sign), and also use implicit multiplication (2n will be interpreted as 2 * n). For example, the following is a valid expression: (-1)^(2n+pi/3)

Using this sigma notation the summation operation is written as 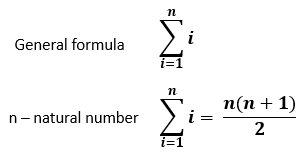 As you can see from the natural number expression, one does not need to perform all the summation operations as there exist mathematically shortcuts for many cases. For more complex series, for example summation of squares, instead of "i" one would write i2 after the sigma notation (the indexed variable).

The notation only matters if you want to communicate summation to others. For the purpose of using this sum calculator we should say that we use the standard formula for summing up the numbers you input.

If you'd like to cite this online calculator resource and information as provided on the page, you can use the following citation:
Georgiev G.Z., "Summation Calculator", [online] Available at: https://www.gigacalculator.com/calculators/sum-calculator.php URL [Accessed Date: 06 Dec, 2022].