Use this online calculator to easily calculate the square root of a given number.

What is a square root?

The square root of a number answers the question "what number can I multiply by itself to get this number?". It is the reverse of the exponentiation operation with an exponent of 2, so if r2 = x, then we say that "r is the root of x". Finding the root of a number has a special notation called the radical symbol: √. Usually the radical spans over the entire equation for which the root is to be found. It is called a "square" root since multiplying a number by itself is called "squaring" as it is how one finds the area of a square.

For every positive number there are two square roots - one positive and one negative. For example, the square root of 4 is 2, but also -2, since -2 x -2 = 4. The negative root is always equal in value to the positive one, but opposite in sign. You can see examples in the table of common roots below. Most often when talking about "the root of" some number, people refer to the Principal Square Root which is always the positive root. This is the number our square root calculator outputs as well.

In geometrical terms, the square root function maps the area of a square onto its side length. The function √x is continuous for all nonnegative x and differentiable for all positive x.

Properties and practical application of the square root

Square roots appear frequently in mathematics, geometry and physics. For example, many physical forces measured in quantities or intensities diminish inversely proportional to the square root of the distance. So, gravity between two objects 4 meters apart will be 1/√4 relative to their gravity at 0 meters. The same is true for radar energy waves, radio waves, light and magnetic radiation in general, and sound waves in gases. It is usually referred to as the "inverse-square law".

The square root is key in probability theory and statistics where it defines the fundamental concept of standard deviation. 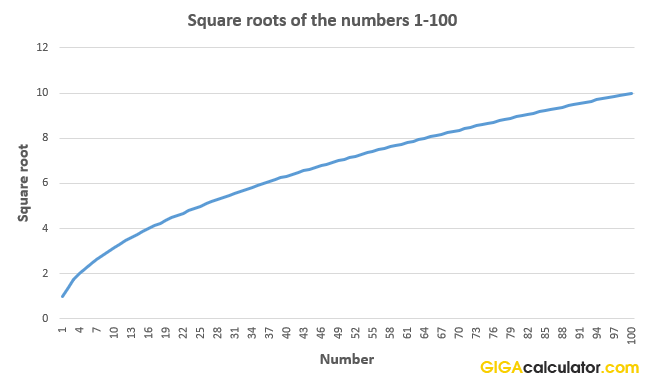 Plotting the results from the square root function, as calculated using this square root calculator, on a graph reveals that it has the shape of half a parabola.

The calculations were performed using this calculator.

If you'd like to cite this online calculator resource and information as provided on the page, you can use the following citation:
Georgiev G.Z., "Square Root Calculator", [online] Available at: https://www.gigacalculator.com/calculators/square-root-calculator.php URL [Accessed Date: 07 Jul, 2022].