Use this advanced sample size calculator to calculate the sample size required for a one-sample statistic, or for differences between two proportions or means (two independent samples). More than two groups supported for binomial data. Calculate power given sample size, alpha, and the minimum detectable effect (MDE, minimum effect of interest).

This calculator allows the evaluation of different statistical designs when planning an experiment (trial, test) which utilizes a Null-Hypothesis Statistical Test to make inferences. It can be used both as a sample size calculator and as a statistical power calculator. Usually one would determine the sample size required given a particular power requirement, but in cases where there is a predetermined sample size one can instead calculate the power for a given effect size of interest.

1. Number of test groups. The sample size calculator supports experiments in which one is gathering data on a single sample in order to compare it to a general population or known reference value (one-sample), as well as ones where a control group is compared to one or more treatment groups (two-sample, k-sample) in order to detect differences between them. For comparing more than one treatment group to a control group the sample size adjustments based on the Dunnett's correction are applied. These are only approximately accurate and subject to the assumption of about equal effect size in all k groups, and can only support equal sample sizes in all groups and the control. Power calculations are not currently supported for more than one treatment group due to their complexity.

3. Baseline The baseline mean (mean under H0) is the number one would expect to see if all experiment participants were assigned to the control group. It is the mean one expects to observe if the treatment has no effect whatsoever.

If entering means data, one needs to specify the mean under the null hypothesis (worst-case scenario for a composite null) and the standard deviation of the data (for a known population or estimated from a sample).

Why is sample size determination important?

While this online software provides the means to determine the sample size of a test, it is of great importance to understand the context of the question, the "why" of it all.

Estimating the required sample size before running an experiment that will be judged by a statistical test (a test of significance, confidence interval, etc.) allows one to:

This is crucial information with regards to making the test cost-efficient. Having a proper sample size can even mean the difference between conducting the experiment or postponing it for when one can afford a sample of size that is large enough to ensure a high probability to detect an effect of practical significance.

For example, if a medical trial has low power, say less than 80% (β = 0.2) for a given minimum effect of interest, then it might be unethical to conduct it due to its low probability of rejecting the null hypothesis and establishing the effectiveness of the treatment. Similarly, for experiments in physics, psychology, economics, marketing, conversion rate optimization, etc. Balancing the risks and rewards and assuring the cost-effectiveness of an experiment is a task that requires juggling with the interests of many stakeholders which is well beyond the scope of this text.

What is statistical power?

Statistical power is the probability of rejecting a false null hypothesis with a given level of statistical significance, against a particular alternative hypothesis. Alternatively, it can be said to be the probability to detect with a given level of significance a true effect of a certain magnitude. This is what one gets when using the tool in "power calculator" mode. Power is closely related with the type II error rate: β, and it is always equal to (1 - β). In a probability notation the type two error for a given point alternative can be expressed as [1]:

It should be understood that the type II error rate is calculated at a given point, signified by the presence of a parameter for the function of beta. Similarly, such a parameter is present in the expression for power since POW = 1 - β [1]:

In the equations above cα represents the critical value for rejecting the null (significance threshold), d(X) is a statistical function of the parameter of interest - usually a transformation to a standardized score, and μ1 is a specific value from the space of the alternative hypothesis.

One can also calculate and plot the whole power function, getting an estimate of the power for many different alternative hypotheses. Due to the S-shape of the function, power quickly rises to nearly 100% for larger effect sizes, while it decreases more gradually to zero for smaller effect sizes. Such a power function plot is not yet supported by our statistical software, but one can calculate the power at a few key points (e.g. 10%, 20% ... 90%, 100%) and connect them for a rough approximation.

Statistical power is directly and inversely related to the significance threshold. At the zero effect point for a simple superiority alternative hypothesis power is exactly 1 - α as can be easily demonstrated with our power calculator. At the same time power is positively related to the number of observations, so increasing the sample size will increase the power for a given effect size, assuming all other parameters remain the same.

Power calculations can be useful even after a test has been completed since failing to reject the null can be used as an argument for the null and against particular alternative hypotheses to the extent to which the test had power to reject them. This is more explicitly defined in the severe testing concept proposed by Mayo & Spanos (2006).

Computing observed power is only useful if there was no rejection of the null hypothesis and one is interested in estimating how probative the test was towards the null. It is absolutely useless to compute post-hoc power for a test which resulted in a statistically significant effect being found [5]. If the effect is significant, then the test had enough power to detect it. In fact, there is a 1 to 1 inverse relationship between observed power and statistical significance, so one gains nothing from calculating post-hoc power, e.g. a test planned for α = 0.05 that passed with a p-value of just 0.0499 will have exactly 50% observed power (observed β = 0.5).

I strongly encourage using this power and sample size calculator to compute observed power in the former case, and strongly discourage it in the latter.

Types of null and alternative hypotheses in significance tests

In a Neyman-Pearson framework of NHST (Null-Hypothesis Statistical Test) the alternative should exhaust all values that do not belong to the null, so it is usually composite. Below is an illustration of some possible combinations of null and alternative statistical hypotheses: superiority, non-inferiority, strong superiority (margin > 0), equivalence. 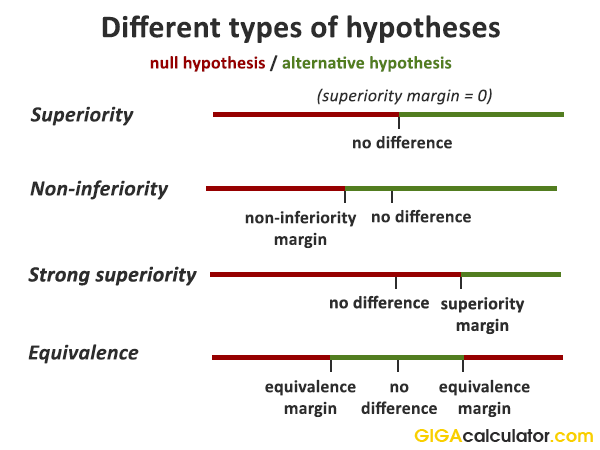 All of these are supported in our power and sample size calculator.

Careful consideration has to be made when deciding on a non-inferiority margin, superiority margin or an equivalence margin. Equivalence trials are sometimes used in clinical trials where a drug can be performing equally (within some bounds) to an existing drug but can still be preferred due to less or less severe side effects, cheaper manufacturing, or other benefits, however, non-inferiority designs are more common. Similar cases exist in disciplines such as conversion rate optimization [2] and other business applications where benefits not measured by the primary outcome of interest can influence the adoption of a given solution. For equivalence tests it is assumed that they will be evaluated using a two one-sided t-tests (TOST) or z-tests, or confidence intervals.

When using a sample size calculator it is important to know what kind of inference one is looking to make: about the absolute or about the relative difference, often called percent effect, percentage effect, relative change, percent lift, etc. Where the fist is μ1 - μ the second is μ1-μ / μ or μ1-μ / μ x 100 (%). The division by μ is what adds more variance to such an estimate, since μ is just another variable with random error, therefore a test for relative difference will require larger sample size than a test for absolute difference. Consequently, if sample size is fixed, there will be less power for the relative change equivalent to any given absolute change.

For the above reason it is important to know and state beforehand if one is going to be interested in percentage change or if absolute change is of primary interest. Then it is just a matter of fliping a radio button.

If you'd like to cite this online calculator resource and information as provided on the page, you can use the following citation:
Georgiev G.Z., "Sample Size Calculator", [online] Available at: https://www.gigacalculator.com/calculators/power-sample-size-calculator.php URL [Accessed Date: 27 Jan, 2022].