Use this Z table calculator to easily calculate the Z-score from a given raw score. Also computes areas under the normal curve (p-values) cut off by a given score. A table of Z scores and corresponding p-values is included, as well as the z score formula. Also calculates Z from p.

The z score calculator can be used to derive a z statistic from a raw score and known or estimated distribution mean and standard deviation. If the variance is known instead, then the standard deviation is simply its square root. The output also contains probabilities calculated for different areas under the standard normal curve which correspond to a one-tailed or two-tailed test of significance. The cumulative probabilities are calculated using the standard normal cumulative distribution function (CDF).

The z statistic calculator can also be used in inverse - to obtain a Z critical value corresponding to a given probability. Simply select "Z score from P" and enter the p-value threshold in the field to obtain the standard score defining the critical region.

What is a Z Distribution? 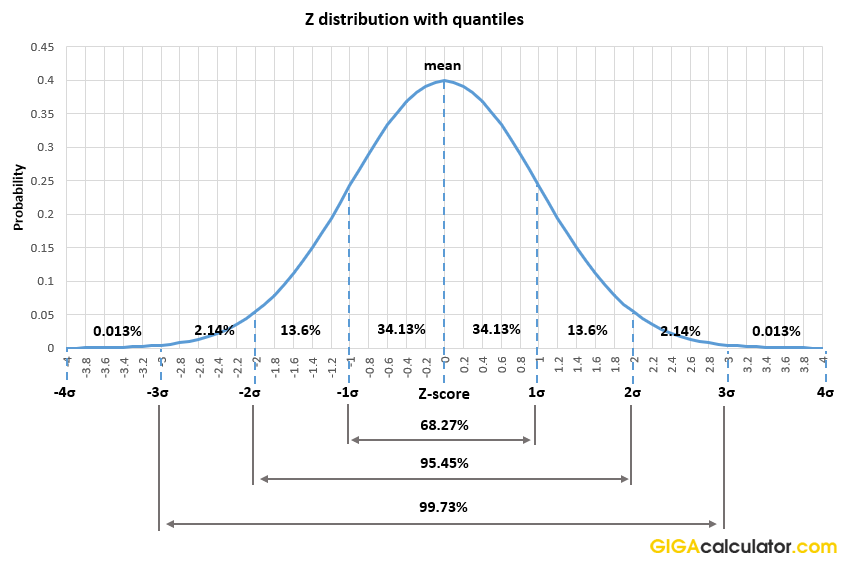 The fact that the distribution is standardized means that the quantiles are known, and that area between any two Z scores is also known. For example, 68.27% of values would fall between -1 and 1 standard deviations of a Z distribution. Similarly, just over 95% of its probability density falls between -2 and +2 standard deviations. The entire distribution density sums to 1 and just like other normal distributions it is fully defined by its first two moments. These and other qualities make it a useful tool in statistics and probability calculation of various sorts.

Our z score calculator uses the CDF of the Z distribution to find the area under the standard normal curve above, below, between, or outside regions defined by given scores. It uses the inverse CDF to calculate Z scores from p-values.

The z-score, also referred to as standard score and z-value is a signed real valued dimensionless quantity which indicates the number of standard deviations by which a given observed data point is distanced from the mean or expected value of a distribution. Standard refers to the fact that they are computed against the standard normal distribution (a.k.a. Z distribution) which is fully defined by its mean and standard deviation of zero and one, respectively.

Z values have numerous applications in statistical inference and estimation. Most commonly they are used in a Z-test of significance as well as confidence interval calculations [4]. They are also used in process control and quality assurance applications (e.g. six sigma). Due to Z values being standardized scores they are useful in comparing measurements across different scales which is often needed in both scientific and applied disciplines.

The formula for calculating a z score from a raw score from is given by the simple equation:

Using the above formula one can easily convert a raw score from a normal distribution with known or estimated mean and standard deviation to a standard score. An online Z calculator can perform the arithmetic for you quickly and easily.

A Z table contains tabulated values of the Z distribution and their corresponding quantiles, or percentages. Since a table of Z scores can be used to judge either a point null hypothesis (e.g. the effect is exactly zero), as well as the more commonly needed composite nulls such as μ1 ≤ 0, a proper Z table should contain both types of cumulative probabilities. In the table below, a one-tailed p-value / percentile refers to the area under the standard normal curve to the right of the Z score ( P(X > z) ), whereas a two-tailed p-value / percentile refers to the cumulative probability contained in the union of the areas to the right of -Z and to the left of Z ( P(X < -|z| ∪ X > |z|) ).

Note that since the standard normal distribution is symmetrical, a two-tailed p-value is exactly twice that of a one-tailed one for the same value of Z. Obviously, such a table has limited utility nowadays when it is much easier to use a free online z table calculator like ours. Refer to the documentation and graphs in our critical value calculator page for more on critical values and regions.

This tells us that the raw score of 1600 is 2 standard deviations away from the mean. The normal CDF can then be used to arrive at whatever area under the standard normal curve is of interest. For example, to reject the hypothesis that the true value related to the observation is not lower than or equal to zero, one needs to compute

which is the 2.28% percentile. For the last part one can look up the Z table for the row where Z = 2, or use a Z score probability calculator if the value is not tabulated or a greater precision is needed.

If you'd like to cite this online calculator resource and information as provided on the page, you can use the following citation:
Georgiev G.Z., "Z Score Calculator", [online] Available at: https://www.gigacalculator.com/calculators/z-score-calculator.php URL [Accessed Date: 28 Nov, 2022].