In statistics, the phenomenon measured by covariance is that of statistical correlation. We say two random variables or bivariate data vary together if there is some form of quantifiable association between them. A trivial example is the change in the intensity of cloud coverage and rainfall precipitation in a given region. Plotting the two variables, we will observe that they tend to change together, suggesting some statistical dependence between them. Such joint variability can be due to direct causality, indirect causality, or entirely spurious.

A covariance of zero signifies complete lack of a statistical association (orthogonality), but not necessarily statistical independence. For other values of cov(X,Y) the magnitude is difficult to interpret in practice as it depends on the scale of the values of both variables. This is the reason why for most practical purposes a standardized version of covariance called a correlation coefficient is used instead. It makes comparisons of the joint variability between variables on different scales possible.

To use the calculator, first enter the data you want to analyze: one column per variable, X and Y. Optionally, you can enter pair weights in a third column, in which case they will be applied to the values resulting in a weighted covariance. Columns need to be separated by spaces, tabs, or commas. Copy-pasting from Excel or another spreadsheet software should work just fine. All columns should have an equal number of rows in them.

When you press 'Calculate' the covariance calculator will produce as output the sample covariance, population covariance (see below for the differences between the two), the arithmetic mean of X, the mean of Y, and the count of samples (pairs).

There are two slightly different equations for calculating covariance. Which one is applicable depends on the particular type of data and analysis, as explained below.

The formula for computing population covariance is:

where cov(X,Y) means the covariance of the variables X and Y and Σ is the Greek upper-case letter "sigma", the commonly used symbol for mathematical summation, x-bar is the sample mean of the X data set (x-mean), y-bar is the sample mean of the Y data set, and xi and yi are elements of these datasets indexed by i. n is simply the number of elements in each data set. This formula is applicable if the observed values of X and Y consist of the entire population of interest and in such case it is a population parameter stemming from the joint probability distribution. As this is rare in practice, to calculate covariance one most often uses the covariance formula below.

The formula for sample covariance is:

which is essentially the same as for population covariance, but the denominator is n-1 instead of just n. This adjustment reflects the additional degree of freedom that comes from the data being just a sample. Such a covariance is a statistical estimate of the covariance of a larger population based on samples from two random variables.

Both equations are supported by our covariance calculator so it is great way to easily explore the relationship between the two estimates.

Covariance has applications in multiple scientific and applied disciplines such as financial economics, genetics, molecular biology, machine learning, and others. Covariance matrices are used in principle component analysis (PCA) which reduces feature dimensionality in data preprocessing.

In this example we will settle for the simpler problem of the association between smoking and life duration. What would the joint variability of these two variables look like for a given research sample? Let's say we take a representative sample of fifteen men fifty years and older who smoke, and measure both the number of cigarettes they consume per day and the age at which they died. The number of cigarettes is the independent variable X, whereas life duration in years is the dependent variable Y.

By using the calculator we get a resulting sample covariance of -85.90. The negative sign suggests an inverse relationship between smoking and longevity - the more cigarettes per day, the shorter the lifespan.

Here is how the scatterplot of the two variables looks like: 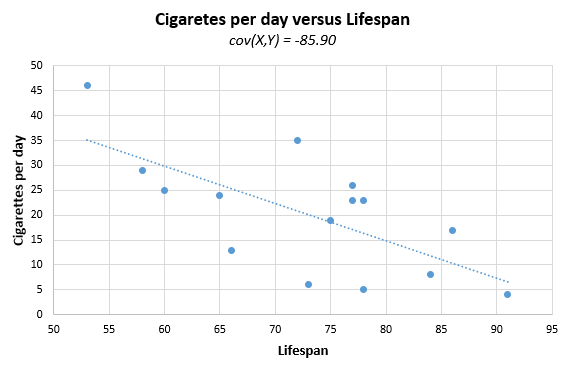 If you'd like to cite this online calculator resource and information as provided on the page, you can use the following citation:
Georgiev G.Z., "Covariance Calculator", [online] Available at: https://www.gigacalculator.com/calculators/covariance-calculator.php URL [Accessed Date: 07 Jul, 2022].