Use this dice odds calculator to easily calculate any type of dice roll probability: sum of two dice, sum of multiple dice, getting a value greater than or less than on a given throw of N dice, and so on. Different types of dice are supported: from four-sided, six-sided, all the way to 20-sided (D4, D6, D8, D10, D12, and D20) so that success probabilities and dice odds in popular dice games can be computed.

The tool can be used to compute dice probabilities for any type of game of chance or probability problem as used in teaching basic statistical concepts such as sample space and p-values. It supports the classic scenario of computing probabilities of the sum of two six-sided dice, but also supports 4-sided, 8-sided, 10-sided, 12-sided, and 20-sided dice. In the classic problem two dice are thrown, but with this dice calculator you can also explore it with three or more dice.

The calculator can output, depending on the choice of probability calculation, the probability of:

With such versatility you can calculate dice probabilities for most games of chance such as Craps, Backgammon, Dungeons & Dragons (D&D), Balut, Dice 10000, Diceball!, Dudo, Elder Sign, Kismet, Yahtzee, Bunco, and many more.

The classic case of exploring dice throw probabilities (dice rolling odds) is to estimate the chance of landing a given sum on the faces of two six-sided dice. In this example, two dice are thrown together and one records their face values, and computes their sum. Each die is a cube with six faces with the numbers from one to six printed on each side. One throws two dice and the value of a roll is whatever number faces up once the die settles in place. 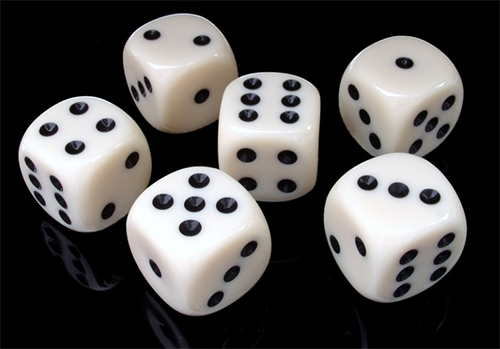 The image above shows six such dice each with a different face up. The question is: what is the probability of rolling a given sum with two six-sided dice?. The dice are assumed to be fair (unbiased), meaning each side has equal probability of turning up. Also, the outcome of each roll is independent of rolls preceding or succeeding it. A series of fair dice rolls can be modelled as independent events.

In essence, one needs to first estimate the size of the set of all possible outcomes of the dice throw known as the sample space, and then figure out how many of these result in the desired sum. To solve this problem, one needs to calculate every possibility which might turn up which amounts to estimating how many possible permutations there are in total.

For two 6-sided dice there are exactly 6^2 = 6 · 6 = 36 possible permutations with repetition (selecting two numbers from a set of six).

Knowing the sample space means now we need only compute how many possible ways there are for the dice to result in the sum of interest. For example, if the sum of interest is 12, there is just a single dice permutation which results in such a sum - it only happens if both dice thrown roll a six (double sixes, a.k.a. 'boxcars'). The chance to roll a twelve is then 1 out of 36 = 1 / 36 = 0.02777 or 2.77%. It is also the chance of rolling double ones (a.k.a. 'snake eyes').

Doing the calculations for all possible outcomes between two and twelve for the sum of two dice rolls one arrives at the following chart of dice probabilities and dice odds. It is for two dice rolled simultaneously or one after another (classic 6-sided dice): 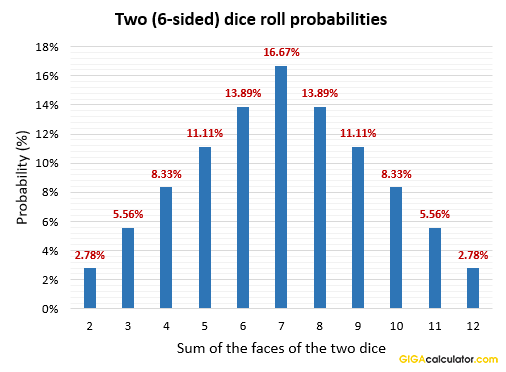 The probability (P) of rolling a given sum (p) by throwing any number of dice (n) with a given number of sides or faces (s) can be calculated using the general formula as provided by Uspensky 1937 [1]:

The brackets ⌊ ... ⌋ in the upper limit of the sigma operator denote the floor mathematical function. The round brackets with two numbers one on top of the other denote combinations without repetition. It is read as "n choose k" and its computation uses the factorial function. This makes it somewhat difficult to compute the equation by hand so a dice probability calculator comes in super handy even with a small number of dice.

Probabilities with a single die roll

The probability of rolling any given number with a single die on a single roll is equal to one divided by the number of die faces. For example, with a 20-sided die, the odds of rolling 20 is 1/20 or a 5% chance. With a classic six-sided die the probability of seeing any particular face is 16.667% or chance odds of 1/6. As you can see, single die roll probabilities require only simple division to calculate.

Probability of rolling a certain number with n dice throws

Here is a chart of the probabilities of getting at least one six with increasing number of dice rolls: 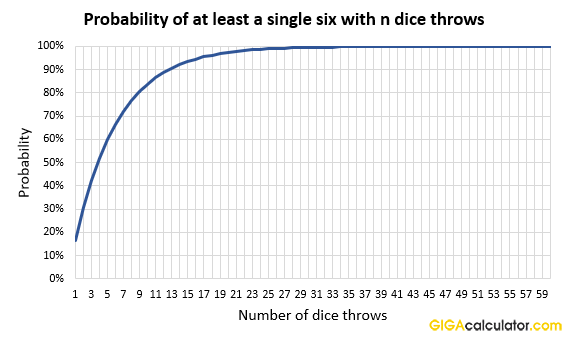 While the probability increases slowly with each subsequent dice throw, it never actually reaches 100%.

Probability of rolling a certain number on all n dice 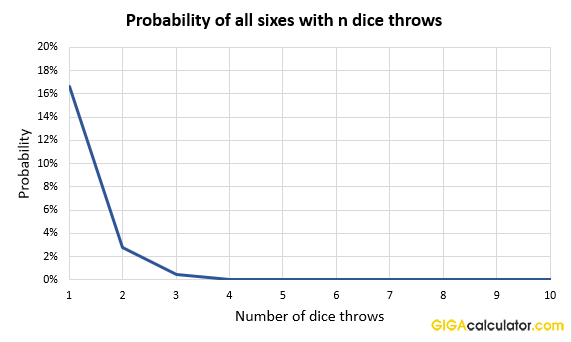 With just ten dice throws, the probability of rolling a six on all is a mere 0.000002%, and the chance only decreases further when more dice throws are added.

Here are a few more examples for the odds in different games with dice.

What are the odds of throwing more than 9 at craps?

What are the odds of rolling 38 or more in D&D?

If you'd like to cite this online calculator resource and information as provided on the page, you can use the following citation:
Georgiev G.Z., "Dice Probability Calculator", [online] Available at: https://www.gigacalculator.com/calculators/dice-probability-calculator.php URL [Accessed Date: 28 Nov, 2022].